Creatures of the World Wikia
Register
Don't have an account?
Sign In
Advertisement
in: Herbivores, Mammals, African-Animals,
and 48 more

Poachers
The African Bush or Savannah Elephant (Loxodonta Africana) is the largest animal on land and the biggest species of elephant on Earth. They are slightly larger than their Asian cousins and can be identified by their larger ears that look somewhat like the continent of Africa. (While the Asian Elephant has smaller, rounded ears that shaped like the country of India.)

The African bush elephant has grey skin with scanty hairs. Its large ears cover the whole shoulder. They can grow as large as 2 m × 1.5 m (6.6 ft × 4.9 ft). Large ears help to reduce body heat; flapping them creates air currents and exposes the ears' inner sides where large blood vessels increase heat loss during hot weather. The African bush elephant's ears are pointed and triangular shaped. Its occipital plane slopes forward. Its back is shaped markedly concave. Its sturdy tusks are curved out and point forward.

The trunk is a prehensile elongation of its upper lip and nose. Short tactile hair grows on the trunk, which has two finger-like processes on the tip. This highly sensitive organ is innervated primarily by the trigeminal nerve, and thought to be manipulated by about 40–60,000 muscles. Because of this muscular structure, the trunk is so strong that elephants can use it for lifting about 3% of their own body weight. They use it for smelling, touching, feeding, drinking, dusting, producing sounds, loading, defending and attacking. Functional loss of the trunk due to flaccid trunk paralysis sometimes makes the elephant carry the trunk over the tusk and walk into deep water in order to drink.

The tusks grow from deciduous teeth known as tushes that develop in the upper jaw and consist of a crown, root and pulpal cavity, which are completely formed soon after birth. Tushes reach a length of 5 cm (2 in). The tusks erupt when elephants are 1–3 years old and grow throughout life. They are composed of dentin and coated with a thin layer of cementum. Their tips bear a conical layer of enamel that is usually worn off when the elephant is five years old. Tusks of bulls grow faster than tusks of females. Mean weight of tusks at the age of 60 years is 109 kg (240 lb) in bulls, and 17.7 kg (39.0 lb) in cows. The longest known tusk of an African bush elephant measured 3.51 m (11.5 ft) and weighed 117 kg (258 lb).

Elephants eat roots, grasses, fruit, and bark, and they eat a lot of these things. An adult elephant can consume up to 300 pounds (136 kilograms) of food in a single day. These hungry animals do not sleep much, and they roam over great distances while foraging for the large quantities of food that they require to sustain their massive bodies.

Female elephants (cows) live in family herds with their young, but adult males (bulls) tend to roam on their own or in bachelor herds. Having a baby elephant is a serious commitment. Elephants have a longer pregnancy than any other mammal—almost 22 months. Cows usually give birth to one calf every two to four years. At birth, elephants already weigh some 200 pounds (91 kilograms) and stand about 3 feet (1 meter) tall.

African elephants, unlike their Asian relatives, are not easily domesticated. They range throughout sub-Saharan Africa and the rain forests of central and West Africa. The continent’s northernmost elephants are found in Mali’s Sahel desert. The small, nomadic herd of Mali elephants migrates in a circular route through the desert in search of water.

Spermatogenesis starts when bulls are about 15 years old. Females ovulate for the first time at the age of 11 years. They are in estrus for 2–6 days. In captivity, cows have an oestrous cycle lasting 14–15 weeks. Foetal gonads enlarge during the second half of pregnancy.

African bush elephants mate during the rainy season. Bulls in musth cover long distances in search for females and associate with large family units. They listen for the females loud, very low frequency calls and attract females by calling and by leaving trails of strong-smelling urine. Females search for bulls in musth, listen for their calls and follow their urine trails. Bulls in musth are more successful at obtaining mating opportunities than non-musth bulls. Females move away from bulls that attempt to test her estrous condition. If pursued by several bulls, they run away. Once they choose their mating partners, they stay away from other bulls that are threatened and chased away by the favoured bull. Competition between bulls overrides their choice sometimes.

The birth of a calf was observed in Tsavo East National Park in October 1990. A group of 80 elephants including eight bulls had gathered in the morning in a 150 m (490 ft) radius around the birth site. A small group of calves and females stood near the pregnant female, rumbling and flapping their ears. One cow seemed to assist her. While in labour, fluid streamed from her temporal and ear canals. She kept standing while giving birth. The newborn calf struggled to its feet within 30 minutes and walked 20 minutes later. The mother expelled the placenta about 100 minutes after birth and covered it with soil immediately. Captive-born calves weigh between 100 and 120 kg (220 and 260 lb) at birth and gain about 0.5 kg (1.1 lb) weight per day. Cows lactate for about 4.8 years. Calves exclusively suckle their mother’s milk during the first three months. Thereafter, they start feeding independently and slowly increase the time spent feeding until they are two years old. During the first three years, male calves spend more time suckling and grow faster than female calves. After this period, cows reject male calves more frequently from their nipples than female calves. The maximum lifespan of the African bush elephant is between 70 and 75 years. Its generation length is 25 years.

In Botswana's Chobe National Park, subadult elephants are preyed upon by lions. They attacked and fed on elephants when smaller prey species were scarce. Between 1993 and 1996, lions successfully attacked 74 elephants; 26 were older than nine, and one was a bull of over 15 years. Most were killed at night, and hunts occurred more often during waning moon nights than during bright moon nights. In the same park, lions killed eight elephants in October 2005 that were aged between one and 11 years, two of them older than eight years. Successful hunts took place after dark when prides exceeded 27 lions and herds were smaller than five elephants.

Poachers target foremost elephant bulls for their tusks, which leads to a skewed sex ratio and affects the survival chances of a population. Access of poachers to unregulated black markets is facilitated by corruption and in periods of civil war in some elephant range countries.

In June 2002, a container packed with more than 6.5 t (6.4 long tons; 7.2 short tons) ivory was confiscated in Singapore. It contained 42,120 hanko stamps and 532 tusks of African bush elephants that originated in Southern Africa, centered in Zambia and neighboring countries. Between 2005 and 2006, a total of 23.461 t (23.090 long tons; 25.861 short tons) ivory plus 91 unweighed tusks of African bush elephants were confiscated in 12 major consignments being shipped to Asia.

When the international ivory trade reopened in 2006, the demand and price for ivory increased in Asia. The African bush elephant population in Chad's Zakouma National Park numbered 3,900 individuals in 2005. Within five years, more than 3,200 elephants were killed. The park did not have sufficient guards to combat poaching, and their weapons were outdated. Well organized networks facilitated smuggling the ivory through Sudan. Poaching also increased in Kenya in those years. In Samburu National Reserve, 41 bulls were illegally killed between 2008 and 2012, equivalent to 31% of the reserve’s elephant population.

These killings were linked to confiscations of ivory and increased prices for ivory on the local black market. About 10,370 tusks were confiscated in Singapore, Hong Kong, Taiwan, Philippines, Thailand, Malaysia, Kenya and Uganda between 2007 and 2013. Genetic analysis of tusk samples showed that they originated from African bush elephants killed in Tanzania, Mozambique, Zambia, Kenya and Uganda. Most of the ivory was smuggled through East African countries.

Between 2003 and 2015, illegal killing of 14,606 African bush elephants was reported by rangers across 29 range countries. Chad is a major transit country for smuggling of ivory in West Africa. This trend was curtailed by raising penalties for poaching and improving law enforcement.

During the 20th century, the African bush elephant population was severely decimated. Poaching of the elephant has dated back all the way to the years of 1970 and 1980, which was considered the largest killings in history. Unfortunately, the species is placed in harm's way due to the limited conservation areas provided in Africa. In most cases, the killings of the African bush elephant have occurred near the outskirts of the protected areas.

In addition to being poached, the carcasses of elephants may get poisoned by the poachers, to avoid detection by vultures which help rangers track poaching activity by circling around dead animals, and pose a threat to those vultures or birds that scavenge on them. On the 20th of June 2019, the carcasses of 468 white-backed vultures, 17 white-headed vultures, 28 hooded vultures, 14 lappet-faced vultures and 10 cape vultures, altogether 537 endangered vultures, besides 2 tawny eagles, were found in northern Botswana. It is suspected that they died after eating the poisoned carcasses of 3 elephants.

Herd on the Move 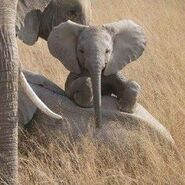 Three elephants at the Okavango River in the Mahango Game Reserve, Namibia 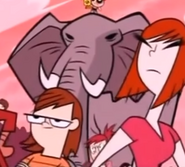 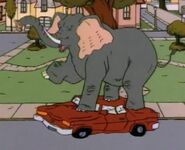 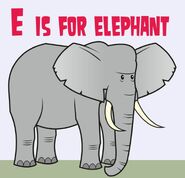 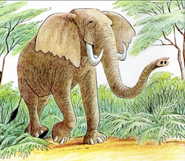 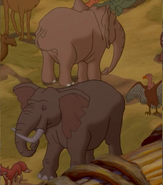