Creatures of the World Wikia
Register
Don't have an account?
Sign In
Advertisement
in: Birds, Birds of Prey, Eagles,
and 29 more

The bald eagle (Haliaeetus leucocephalus, from Greek hali "sea", aiētos "eagle", leuco "white", cephalos "head") is a bird of prey found in North America. A sea eagle, it has two known subspecies and forms a species pair with the white-tailed eagle (Haliaeetus albicilla). Its range includes most of Canada and Alaska, all of the contiguous United States, and northern Mexico. It is found near large bodies of open water with an abundant food supply and old-growth trees for nesting.

The bald eagle is an opportunistic feeder which subsists mainly on fish, which it swoops down and snatches from the water with its talons. It builds the largest nest of any North American bird and the largest tree nests ever recorded for any animal species, up to 4 m (13 ft) deep, 2.5 m (8.2 ft) wide, and 1 metric ton (1.1 short tons) in weight. Sexual maturity is attained at the age of four to five years.

Bald eagles are not actually bald; the name derives from an older meaning of "white headed". The adult is mainly brown with a white head and tail. The sexes are identical in plumage, but females are about 25 percent larger than males. The beak is large and hooked. The plumage of the immature is brown.

The bald eagle is both the national bird and national animal of the United States of America. The bald eagle appears on its seal. In the late 20th century it was on the brink of extirpation in the contiguous United States. Populations have since recovered and the species was removed from the U.S. government's list of endangered species on July 12, 1995 and transferred to the list of threatened species. It was removed from the List of Endangered and Threatened Wildlife in the Lower 48 States on June 28, 2007.

The bald eagle's natural range covers most of North America, including most of Canada, all of the continental United States, and northern Mexico. It is the only sea eagle endemic to North America. Occupying varied habitats from the bayous of Louisiana to the Sonoran Desert and the eastern deciduous forests of Quebec and New England, northern birds are migratory, while southern birds are resident, remaining on their breeding territory all year. At minimum population, in the 1950s, it was largely restricted to Alaska, the Aleutian Islands, northern and eastern Canada, and Florida. Today, they are much more common (almost attaining their peak numbers pre-colonization in North America), and nest in every continental state and province in the United States and Canada.

Bald eagles will also congregate in certain locations in winter. From November until February, one to two thousand birds winter in Squamish, British Columbia, about halfway between Vancouverand Whistler. The birds primarily gather along the Squamish and Cheakamus Rivers, attracted by the salmon spawning in the area.

The bald eagle occurs during its breeding season in virtually any kind of American wetland habitat such as seacoasts, rivers, large lakes or marshes or other large bodies of open water with an abundance of fish. Studies have shown a preference for bodies of water with a circumference greater than 11 km (7 mi), and lakes with an area greater than 10 km2 (4 sq mi) are optimal for breeding bald eagles.

The bald eagle typically requires old-growth and mature stands of coniferous or hardwood trees for perching, roosting, and nesting. Tree species reportedly is less important to the eagle pair than the tree's height, composition and location. Perhaps of paramount importance for this species is an abundance of comparatively large trees surrounding the body of water. Selected trees must have good visibility, be over 20 m (66 ft) tall, an open structure, and proximity to prey. If nesting trees are in standing water such as in a mangrove swamp, the nest can be located fairly low, at as low 6 m (20 ft) above the ground. In a more typical tree standing on dry ground, nests may be located from 16 to 38 m (52 to 125 ft) in height. In Chesapeake Bay, nesting trees averaged 82 cm (32 in) in diameter and 28 m (92 ft) in total height, while in Florida, the average nesting tree stands 23 m (75 ft) high and is 23 cm (9.1 in) in diameter. Trees used for nesting in the Greater Yellowstone area average 27 m (89 ft) high. Trees or forest used for nesting should have a canopy cover of no more than 60%, and no less than 20%, and be in close proximity to water. Most nests have been found within 200 m (660 ft) of open water. The greatest distance from open water recorded for a bald eagle nest was over 3 km (1.9 mi), in Florida.

Bald eagle nests are often very large in order to compensate for size of the birds. The largest recorded nest was found in Florida in 1963, and was measured at nearly 10 feet wide and 20 feet deep. 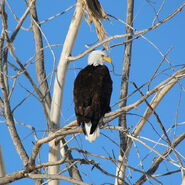 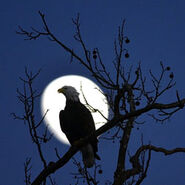 Spirit: Stallion of the Cimmarion (2002) 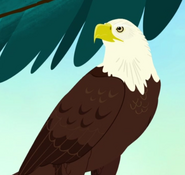 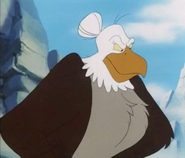