Creatures of the World Wikia
Register
Don't have an account?
Sign In
Advertisement
in: Mammals, Herbivores, Antelope, African-Animals

The gerenuk is a very tall gazelle-like antelope. Its long neck and long thin legs make it one of the most easily identifiable antelopes of the world. The head is long, flattened, narrow and wedge-shaped. It has large, skinny, rounded ears and white rings around its eyes. Females additionally have a dark patch on the crown. The tail terminates in a black tuft. Horns, found only on males, are curved backward and point forward, ending in hooked tips. The reddish-brown to pale tawny coat is of short, fine, glossy hair spread evenly over the whole body. The underparts and the front of the neck are white. A dark band extends from the back partly down to the sides. On the dorsal midline of the neck are reversed hairs directed toward the neck.

Gerenuks seldom graze but browse on prickly bushes and trees, such as acacias. They can reach higher branches and twigs than other gazelles and antelope by standing erect on their rear legs and elongating their necks. They appear to favour the more tender leaves and shoots, but will also eat buds, flowers, fruit, and herbaceous plants. Gerenuks do not appear to drink water; they get enough water from the plants they eat. Because of this, they can survive in very dry habitats. Gerenuks are often prey for lions, cheetahs, hyenas, jackals and leopards.

Gerenuk reproduce throughout the year. Females reach sexual maturity at around one year, and males reach sexual maturity at 1.5 years, although in the wild they may only be successful after acquiring a territory (perhaps 3.5 years). The gestation period is about seven months. They are born one at a time, weighing about 3 kg (6.6 lb) at birth. Offspring were produced through artificial insemination for the first time in 2010 at White Oak Conservation in Yulee, Florida. Four female calves were born, and one of the four was later inseminated successfully by White Oak and SEZARC (South-East Zoo Alliance for Reproduction & Conservation), creating a second generation of calves born from artificial insemination. Gerenuk can live 13 years or more in captivity, and at least eight years in the wild. 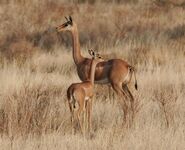