Start a Wiki
An anaconda is a large snake found in tropical South America. Although the name applies to a group of snakes, it is often used to refer only to one species in particular, the common or green anaconda, Eunectes murinus, which is the largest snake in the world by weight, and the second longest snake in the world.

Anacondas make their home in the Amazon jungles of South America and are part of the Boa Constrictor family.  Anacondas live near rivers, lakes and swamps and like to live alone.  Water is their main escape method when confronted with danger. Rather than attacking they will choose to slide into the water unnoticed, if possible. Anacondas eat amphibious animals, like frogs & toads, as well as fish, caiman, birds, ducks and turtles. The average size of one of these snake-giants is 6.1 m (20 feet) long and 148.5 kg. (300 pounds)!

Anacondas give birth to live young, around 24-35 at a time and they are very difficult for scientists to study or even find. They are really quiet and leave no trail. They spend a lot of their time in the dark waters of their habitat.

Anacondas are stocky, muscular snakes that are thicker than other boas. They have thick necks and narrow but large heads. All anacondas have nostrils and eyes on the tops of their heads, which allow them to see above the water while remaining mostly submerged. They have a thick black stripe that runs from the eye to the jaw. Anacondas have small, smooth scales that grow larger toward the posterior of their bodies. They have loose, soft skin that can handle a great deal of water absorption, according to the University of Michigan’s Animal Diversity Web (ADW).

Near their cloacal region, anacondas have spurs on their scales. Males have larger spurs than females, though females are overall larger and longer snakes. In fact, anacondas exhibit the largest sexual dimorphism (with the female being larger) of any tetrapod species, according to Jesus Rivas, a herpetologist and founder of the Anaconda Project. Anacondas’ coloring and size depends on the species. Their spotted, green, yellow and brown color palettes allow them to blend in with tropical rivers and rainforests.

True to their name, these are greenish-brown, olive, or greenish-gray. They have black or brown egg-shaped spots on the mid-to posterior back of their bodies. Their sides are sometimes more yellow than green with egg-shaped spots with yellow centers, according to the Jacksonville Zoo. 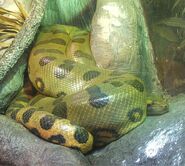 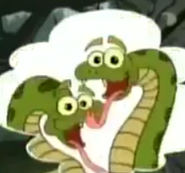 Wild Kratts
Add a photo to this gallery
Retrieved from "https://creatures-of-the-world.fandom.com/wiki/Green_Anaconda?oldid=9676"
Community content is available under CC-BY-SA unless otherwise noted.