Start a Wiki
The killer whale (Orcinus orca), also referred to as the orca whale or orca, and less commonly as the blackfish or grampus, is a toothed whale belonging to the oceanic dolphin family, of which it is the largest member. Killer whales are found in all oceans, from Arctic and Antarctic regions to tropical seas. Killer whales have a diverse diet, although individual populations often specialize in particular types of prey. Some feed exclusively on fish, while others hunt marine mammals like pinnipeds, and even large whales. They have been known to attack baleen whale calves. Killer whales are regarded as apex predators, lacking natural predators.

Killer whales are highly social; some populations are composed of matrilineal family groups which are the most stable of any animal species. Their sophisticated hunting techniques and vocal behaviours, which are often specific to a particular group and passed across generations, have been anthropomorphically described as manifestations of culture.

The IUCN currently assesses the orca's conservation status as data deficient because of the likelihood that two or more killer whale types are separate species. Some local populations are considered threatened or endangered due to prey depletion, habitat loss, pollution (by PCBs), capture for marine mammal parks, and conflicts with fisheries. In late 2005, the "southern resident" population of killer whales that inhabits British Columbia and Washington state waters were placed on the U.S. Endangered Species list. Wild killer whales are not considered a threat to humans, but there have been cases of captive orcas killing or injuring their handlers at marine theme parks. Killer whales feature strongly in the mythologies of indigenous cultures, with their reputation ranging from being the souls of humans to merciless killers.

Female killer whales begin to mature at around the age of 10 (reaching peak fertility around 20), which consists of periods of polyestrous cycling with noncycling periods of between three and 16 months. Gestation varies from 15 to 18 months. To avoid inbreeding, males mate with females from other pods. Mothers calve, with usually a single offspring, about once every five years. In resident pods, births occur at any time of year, although winter is the most common. Mortality is extremely high during the first seven months of life, when 37–50% of all calves die. Weaning begins at about 12 months and completes by the age of two. According to observations in several regions, all male and female killer whale pod members participate in the care of the young. Killer and pilot whales are two of several species (as is now believed to be widespread among many other mammalian species, including humans) where the females are known to go through menopause and live for decades after they have finished breeding. Killer whales are unique among cetaceans, as their heads become relatively shorter as they age, i.e., the orca's caudal section enlongates more-so relative to its head.

Females can often breed until age 40, after which comes a rapid decrease in fertility. The lifespans of wild females average 50 years, with a maximum of 90 years. An exception is Granny (J2), who is the oldest known orca estimated to be 103 years old. Males sexually mature at the age of 15, but do not typically reproduce until age 21. Wild males live around 29 years on average, with a maximum of about 60 years. One male, known as Old Tom, was reportedly spotted every winter between the 1840s and 1930 off New South Wales, Australia. This would have made him up to 90 years old. Examination of his teeth indicated he died around age 35, but this method of age determination is now believed to be inaccurate for older animals. One male known to researchers in the Pacific Northwest (identified as J1) was estimated to have been 59 years old when he died in 2010. Captive killer whale lifespans are typically significantly shorter, usually less than 25 years; however, numerous individuals are alive in their 30s, and a few have reached their 40s.

Killer whales are found in all oceans and most seas. Due to their enormous range, numbers, and density, distributional estimates are difficult to compare, but they clearly prefer higher latitudes and coastal areas over pelagic environments.

Systematic surveys indicate the highest densities of killer whales (>0.40 individuals per 100 km²) in the northeast Atlantic around the Norwegian coast, in the north Pacific along the Aleutian Islands, the Gulf of Alaska and in the Southern Ocean off much of the coast of Antarctica. They are considered "common" (0.20–0.40 individuals per 100 km²) in the eastern Pacific along the coasts of British Columbia, Washington and Oregon, in the North Atlantic Ocean around Iceland and the Faroe Islands. High densities have also been reported but not quantified in the western North Pacific around the Sea of Japan (in very limited areas), Shiretoko Peninsula and off Kushiro (Resident and Transient groups began colonizing in these areas possibly after in 2000s), Sea of Okhotsk, Kuril Islands, Kamchatka and the Commander Islands and in the Southern Hemisphere off the coasts of South Australia, off the coast of northern to southern Brazil and the tip of southern Africa. They are reported as seasonally common in the Canadian Arctic, including Baffin Bay between Greenland and Nunavut, and around Tasmania and Macquarie Island. Information for offshore regions and tropical waters is more scarce, but widespread, if not frequent, sightings indicate the killer whale can survive in most water temperatures. They have been sighted, for example, in the Mediterranean, the Arabian Sea, the Gulf of Mexico and the Indian Ocean around the Seychelles. In the Mediterranean, killer whales are considered "visitors" with the exception of one small population which lives in the Strait of Gibraltar. A distinct population may also exist in Papua New Guinea. Distributions and abundances in other Aisan waters are very unclear, only with sightings time to time have been reported, such as off Phuket and Mergui Archipelago.

Population structure in mid to lower latitudes of the North Pacific is unclear especially in coastal waters. Large concentrations are known to occur north of the Northern Mariana Islands and in the Gulf of Sendai, and repeated sightings are reported off Bali, the east coast of Taiwan, Ryukyu Islands, Izu Islands, in Tsushima Strait, and Izu Peninsula. The modern status of the species along coastal mainland China and its vicinity is unknown. Recorded sightings have been made from almost the entire shoreline; from Bohai and the Yellow Sea in the north to the Zhoushan Islands in the east and the Vietnam coast in the south.

In the Antarctic, killer whales range up to the edge of the pack ice and are believed to venture into the denser pack ice, finding open leads much like beluga whales in the Arctic. However, killer whales are merely seasonal visitors to Arctic waters, and do not approach the pack ice in the summer. With the rapid Arctic sea ice decline in the Hudson Strait, their range now extends deep into the northwest Atlantic. Occasionally, killer whales swim into freshwater rivers. They have been documented 100 mi (160 km) up the Columbia River in the United States. They have also been found in the Fraser River in Canada and the Horikawa River in Japan. Migration patterns are poorly understood. Each summer, the same individuals appear off the coasts of British Columbia and Washington. Despite decades of research, where these animals go for the rest of the year remains unknown. Transient pods have been sighted from southern Alaska to central California. 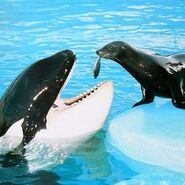 Killler Whale Pod on the move

The Pebble and the Penguins

Family Guy
Add a photo to this gallery
Retrieved from "https://creatures-of-the-world.fandom.com/wiki/Killer_Whale?oldid=11432"
Community content is available under CC-BY-SA unless otherwise noted.