Creatures of the World Wikia
Register
Don't have an account?
Sign In
Advertisement
in: Mammals, Herbivores, Horses,
and 6 more

Przewalski's horse (pronounced /ʃᵻˈvælski/ shə-val-skee or /pʃᵻˈvælski/ pshə-vahl-skee; Khalkha Mongolian: тахь, takhi; Ak Kaba Tuvan: [daɣə//daɢə] dagy; Polish: [pʂɛˈvalskʲi]; Equus ferus przewalskii) or Dzungarian horse, is a rare and endangered subspecies of wild horse (Equus ferus) native to the steppes of central Asia. At one time extinct in the wild (in Mongolia, the last wild Przewalski's horses had been seen in 1966), it has been reintroduced to its native habitat in Mongolia at the Khustain Nuruu National Park, Takhin Tal Nature Reserve, and Khomiin Tal. The taxonomic position is still debated, and some taxonomists treat Przewalski's horse as a species, Equus przewalskii.

Common names for this equine include Asian wild horse, Przewalski's wild horse, Mongolian wild horse, and takhi. Historical but obsolete names include true tarpan and Mongolian tarpan. The horse is named after the Russian geographer and explorer Nikolai Przhevalsky.

Most "wild" horses today, such as the American Mustang or the Australian Brumby, are actually feral horses descended from domesticated animals that escaped and adapted to life in the wild. In contrast, Przewalski's horse has never been domesticated and remains the only truly wild horse in the world today. Przewalski's horse is one of three known subspecies of Equus ferus, the others being the domesticated horse Equus ferus caballus, and the extinct tarpan Equus ferus ferus. There are still a number of other wild equines, including three species of zebra and various subspecies of the African wild ass, onager (including the Mongolian wild ass), and kiang.

Przewalski's horse is stockily built in comparison to domesticated horses, with shorter legs. Typical height is about 12–14 hands (48–56 inches, 122–142 cm), length is about 2.1 m (6 ft 11 in). They weigh around 300 kilograms (660 lb). The coat is generally dun in color with pangaré features, varying from dark brown around the mane (which stands erect) to pale brown on the flanks and yellowish-white on the belly and around the muzzle. The legs of Przewalski's horse are often faintly striped, also typical of primitive markings. The tail is about 90 cm (35.43 in) long, with a longer dock and shorter hair than seen in domesticated horses.

In the wild, Przewalski's horses live in small, permanent family groups consisting of one adult stallion, one to three mares, and their common offspring. Offspring stay in the family group until they are no longer dependent, usually at two or three years old. Bachelor stallions, and sometimes old stallions, join bachelor groups. Family groups can join together to form a herd that moves together.

The patterns of their daily lives exhibit horse behavior similar to that of feral horse herds. Stallions herd, drive and defend all members of their family, while the mare often displays leadership in the family. Stallions and mares stay with their preferred partner for years. While behavioral synchronization is high among mares, stallions other than the main harem stallion are generally less stable in this respect.

Horses maintain visual contact with their family and herd at all times and have a host of ways to communicate with one another, including vocalizations, scent marking, and a wide range of visual and tactile signals. Each kick, groom, tilt of the ear, or other contact with another horse is a means of communicating. This constant communication leads to complex social behaviors among Przewalski's horses.

Przewalski's Horse with Magpie on its back 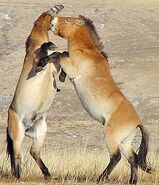